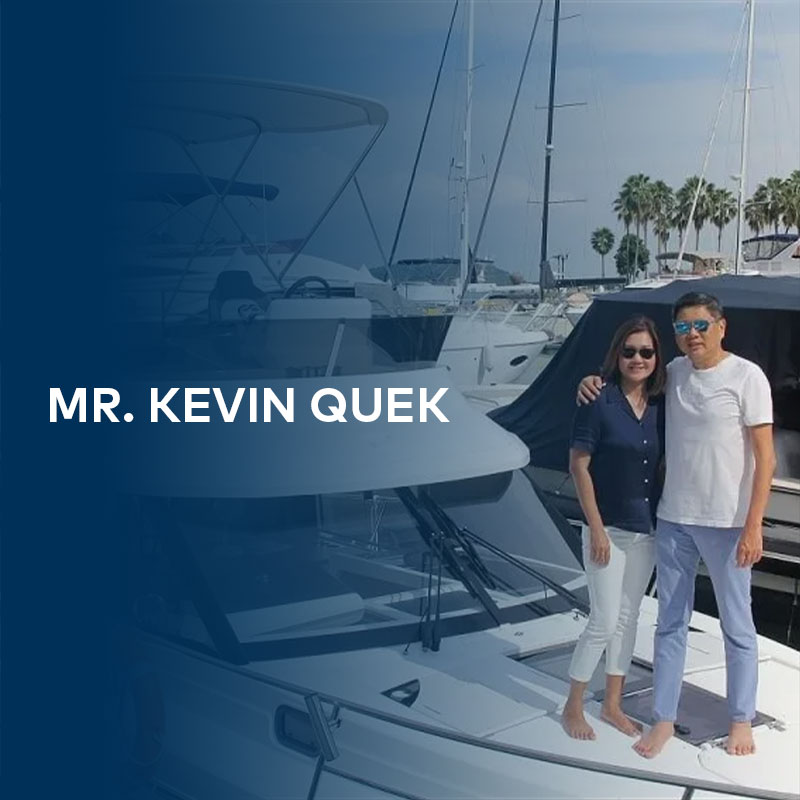 Having built confidence during trips from ONE°15 Marina Sentosa Cove to Lazarus Island, Singaporean Kevin Quek and his wife Alicia now look forward to cruising their Jeanneau Merry Fisher 1095 Fly to the likes of Malaysia and Thailand. 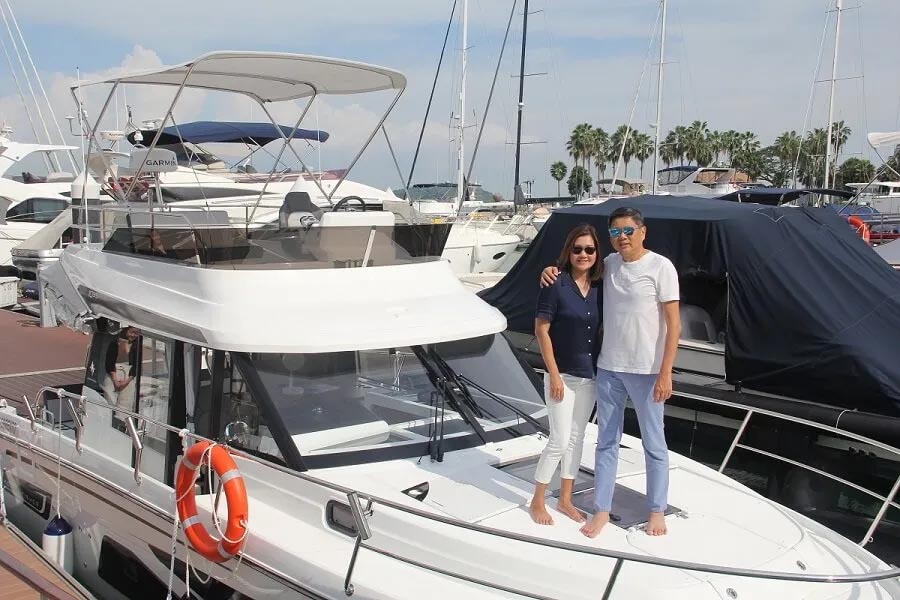 Kevin Quek looks at ease at the wheel of his first boat, a Jeanneau Merry Fisher 1095 Fly he keeps at ONE°15 Marina Sentosa Cove. He’s returning from another visit to Lazarus Island, just south of the marina, during which he’s shown the 34-footer hit its surprising top speed, powered by a pair of 300hp Suzukis.

Quek had previously toyed with the idea of owning a boat before a combination of retirement and lockdown led to him finally taking the plunge and ordering the Merry Fisher flagship.

Having arrived in Singapore this March, the new Jeanneau has already brought a lot of pleasure to Quek and his wife Alicia, parents and friends, although the proud new boat owner smiles as he explains why he really needed a boat. 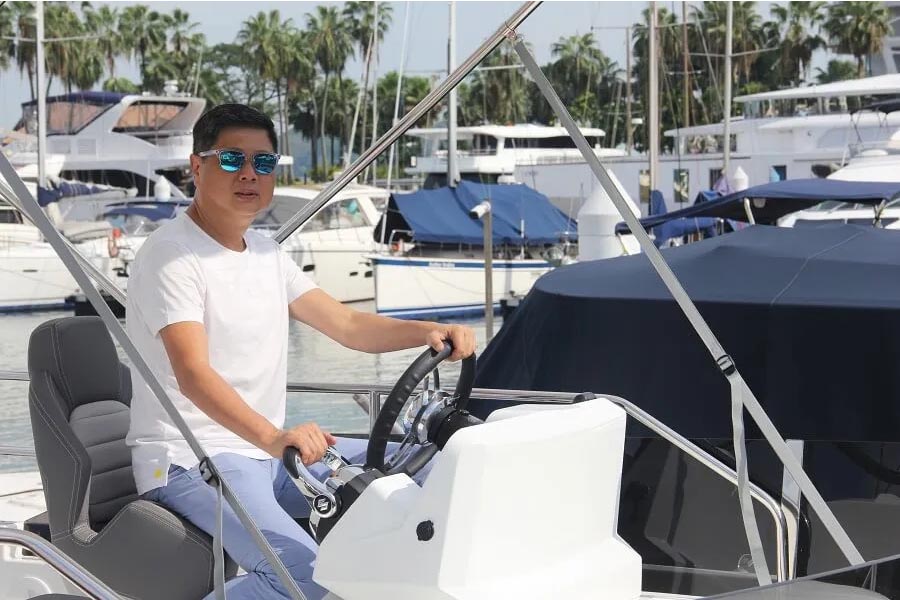 “I always drive from the flybridge because of visibility, but also because it’s what the doctor prescribed,” confides the former fund manager, now in his mid-50s. “At my annual medical check-up, I was told I was deficient in Vitamin D. I’d spent so much time in an air-conditioned room looking at my computer screen every day, so now I’m finally getting enough sun!”

ON THE EDGE OF BOATING

Quek has spent much of his life dabbling in boating and recalls that he came very close to committing full-time to a life at sea when he was young.

“I was so close to signing up to the Navy and almost took a scholarship, but had a change of heart at the very last minute,” he says. “People who took that path at my age are now probably retired as colonels or maybe a one-star general, having worked on much bigger boats than I own now!”

Instead, Quek pursued a career in finance – and did very well. Working for American banks and hedge funds, his career took him to New York, Chicago and Hong Kong, where he worked for eight years before returning to Singapore in 2015. 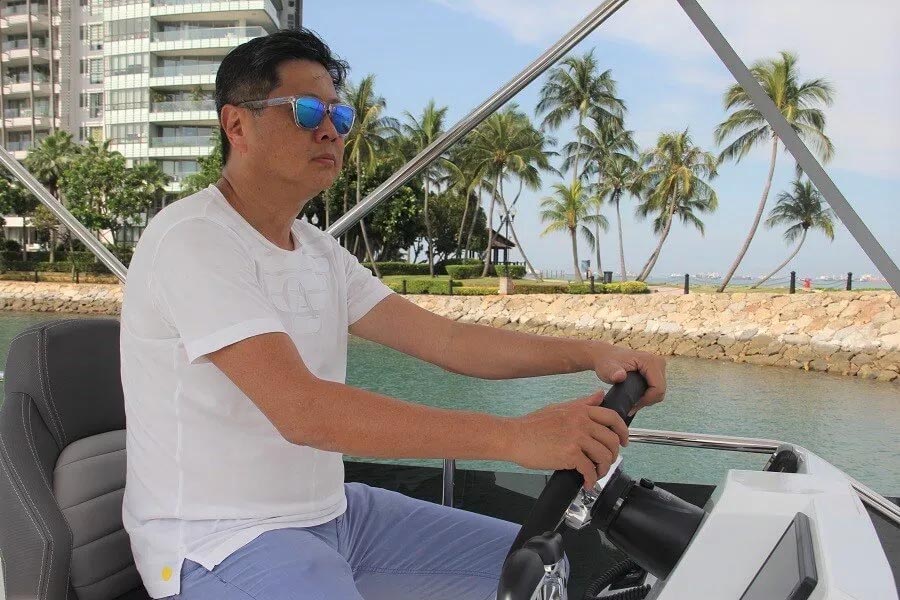 He still showed occasional interest in boating. In his 20s, he did a little sailing and had a PPCDL (power pleasure craft driving licence), then later enjoyed crewed charters while on holiday in the likes of Florida and Phuket.

“I’ll always remember the skipper in Florida. He told us we were having barbecue for dinner, then just jumped into the water with his speargun to catch the fish. That really stuck with me.”

Quek first seriously considered buying a boat about five years ago, having just returned to Singapore. He visited yacht dealers and talked about it with friends, but was still busy with his career and wasn’t convinced it was the right time.

Instead, the Covid-induced lockdown early last year and his retirement made the allure of the sea more appealing than ever. With plenty of time on his hands, he found himself researching cars and boats online. 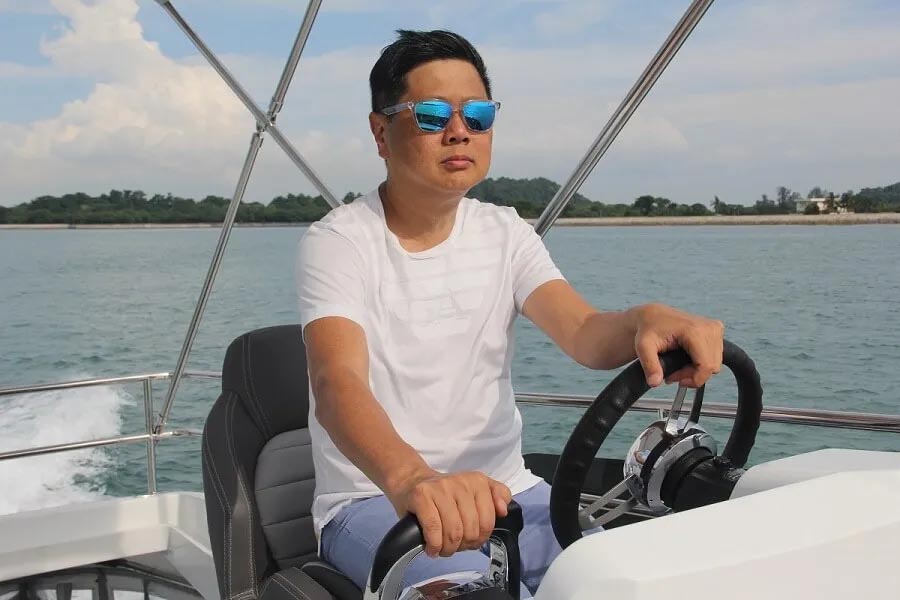 “It struck me that a boat would be a lot of fun, as I had just retired and had time on my hands,” he recalls. “I was looking at sailing catamarans, but sailing just doesn’t look so much fun or romantic in Singapore waters with all these cargo ships around. That’s why I thought I’d start my boating life with a powerboat, a good starter boat, and look at a bigger one later.”

His search led him to the Boat Lagoon Yachting dealership, which is headquartered in Phuket and has a Singapore office at ONE°15 Marina.

He outlined his criteria. The boat had to be big enough to go to the likes of Tioman or Phuket, but small enough that he could comfortably skipper it as a first-time boat owner. He also wanted the reassurance of buying from a long-established builder.

After outlining his budget, he was steered towards the Merry Fisher 1095 Fly, a new model that premiered at the Cannes Yachting Festival in September 2019 and is the range’s first model with a flybridge. Similar otherwise to the standard 1095, the Fly also features a remarkable three cabins on the lower deck. 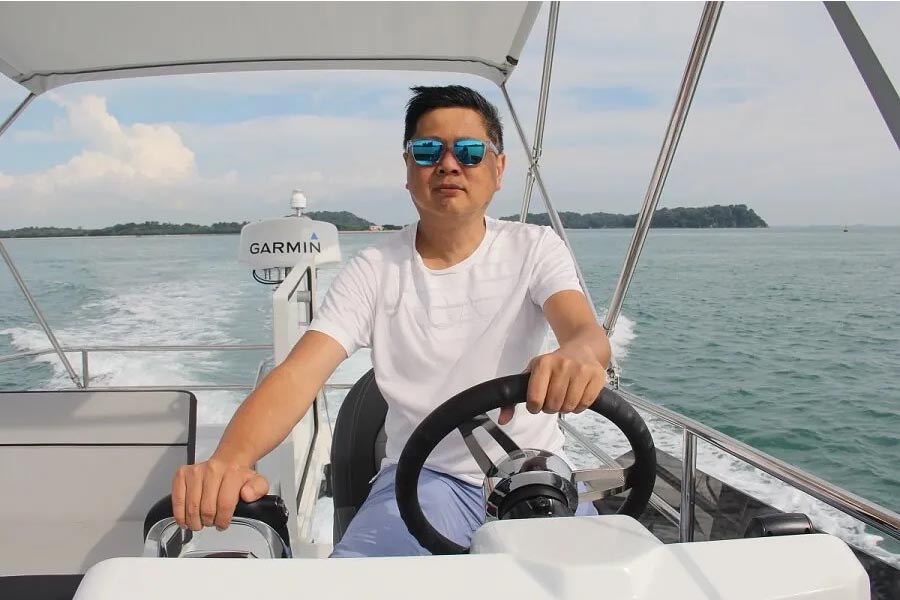 “It’s a lot of boat for the price. I don’t know how they fit three cabins into a 34-footer,” says Quek, who ordered the boat in the third quarter of 2020 after ticking almost every option and upgrade available.

While looking ahead to the boat’s arrival, Quek did a refresher course to renew his licence. However, the first-time boat owner happily admits he needed a little help on his first few trips after the boat arrived in March, using a skipper for the first couple of occasions.

His situation wasn’t helped by initially taking the boat out from a generous temporary berth before being allocated his permanent slot, which has tighter channels. Quek was forced to ask the skipper for another lesson as he tried to get used to his new parking spot.

Alicia chips in: “We were all very nervous. A lot of people in the marina came over to have a look at what was happening!” However, the new owner quickly grew in confidence after using the boat half-a-dozen times within the first month and regularly after that. 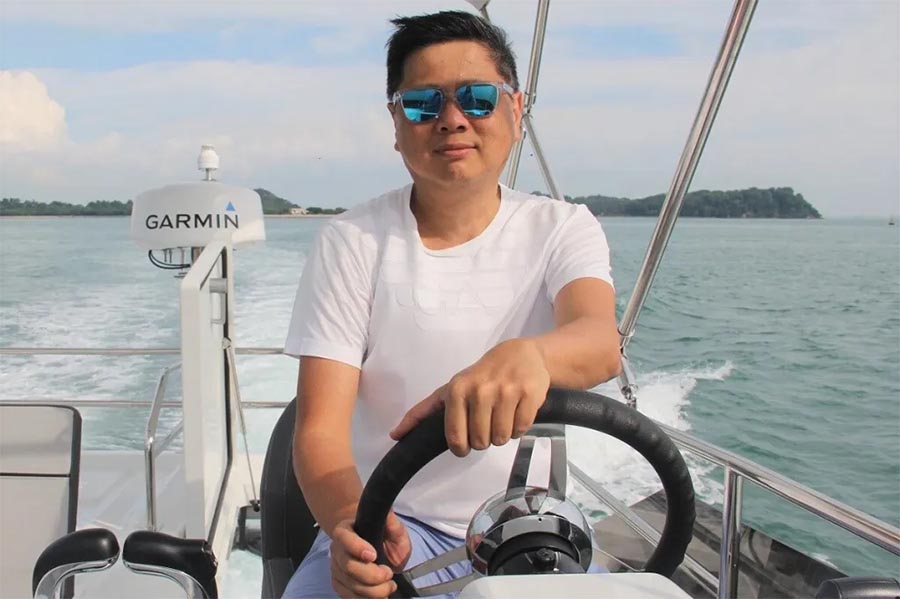 Like many boat owners in Singapore, he regularly heads to Lazarus and St John’s islands, but also enjoys fishing at the likes of nearby Sister’s Island and in the west around Raffles Marina. And he has really enjoyed taking his parents out.

“My parents never had a boat and they’re now retired, in their 70s. They quite like it when we take trips to Lazarus,” says Quek, whose two adult children are overseas. “It’s exciting for my dad and he helps me pack when we come back, putting away the sunpads and so on.”

Although he bought the boat in the Covid era, Quek looks ahead to being able to cruise internationally and already has eyes on two destinations: Tioman in southeast Malaysia, about 130nm from Singapore, and Phuket in southern Thailand, a journey of about 650nm.

“We’d like to go to Tioman with some friends for a week or so. I love the clear water there and I think it would be a good first trip out of Singapore,” he says. “Then we’d look at Phuket, which would be a much longer trip. It has a lot to offer boaters. We’re even considering having a second home there and maybe even a sailing catamaran.”