About 58 kilometres off Peninsular Malaysia’s east coast, in the South China Sea, lies Tioman Island, a tear-shaped island paradise. Tioman Island, measuring 38 kilometres long and 19 kilometres at its widest, is the largest in a group of the 64 volcanic islands. The striking profile of the twin peaks of Simukut Mountain provides a remarkable landmark to this beautiful island, reputed to be one of the ten most beautiful and idyllic islands in the world. 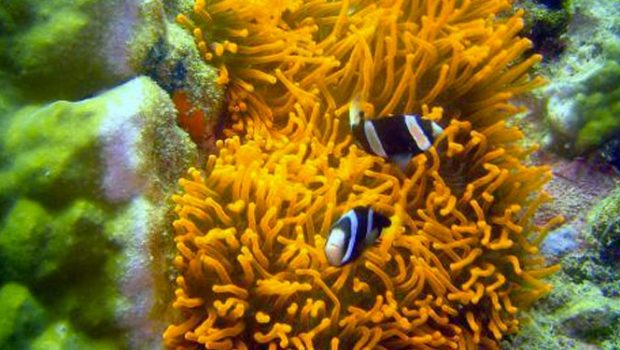 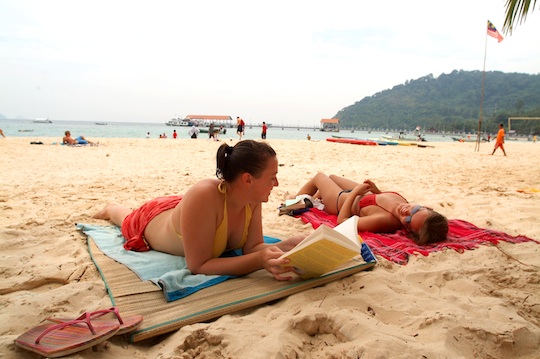 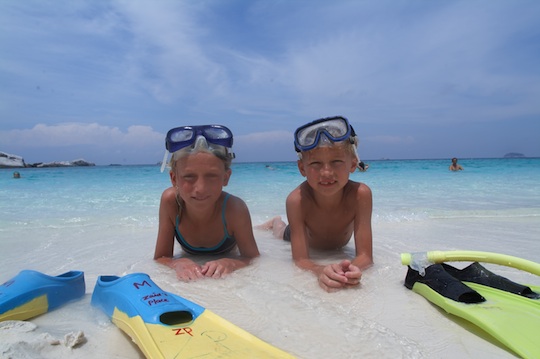 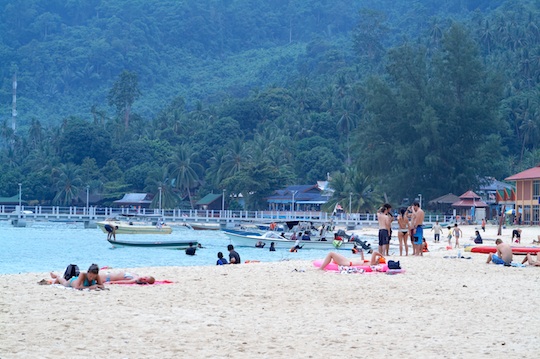 Tioman Island is said to be the final resting place of a fabled dragon princess from China. Legend has it that on her way to visit a prince in Temasek (Singapore), she made a stop at Tioman where she immediately fell in love with the charms and beauty of the island. She decided to dedicate her life to weary travelers by giving them shelter and comfort while resting on the island. 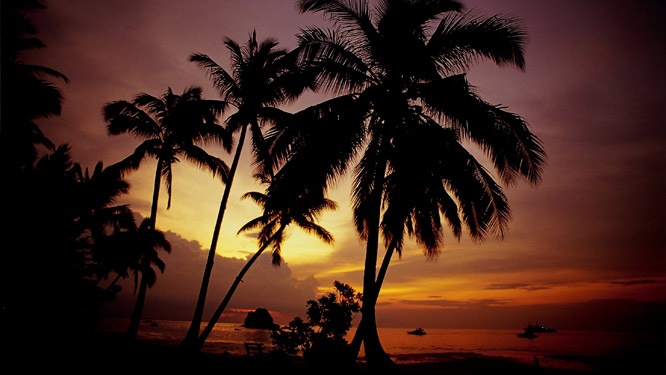 White, sandy beaches with hidden coves, waterfalls set against the towering twin peaks, and lush forest throughout the island makes Pulau Tioman a Paradise on earth.

The thick jungle of Tioman holds many species of wildlife and plants that are endemic to the island. The isolation of the island, coupled with the short generation times of most insects and plants, make Tioman island a worthy topic of study by botanists and others.

Boulder strewn stream beds are common in the island’s interior and are a source of cool water to refresh oneself after a hot and sticky trek. Some of the vegetation in the hills is primary forest where little or no disturbance has occurred. Here, the undergrowth is relatively light and characterized by the presence of many palms and shrubs. 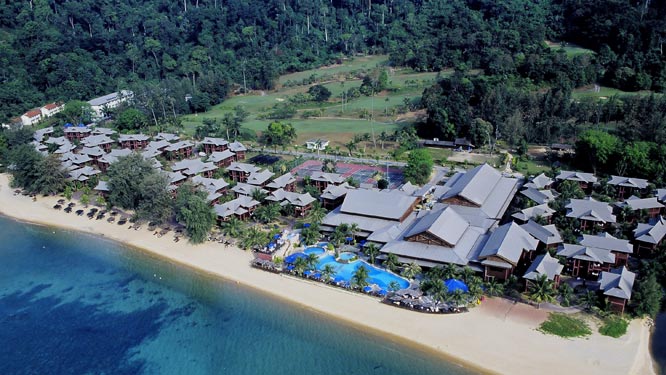 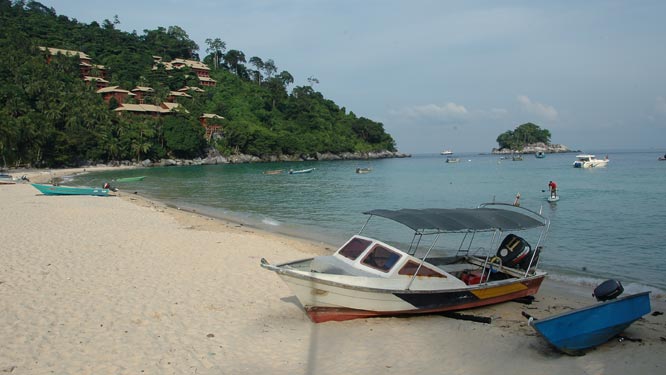 Places to Visit in Tioman Island:

Places to Visit around Tioman Island: 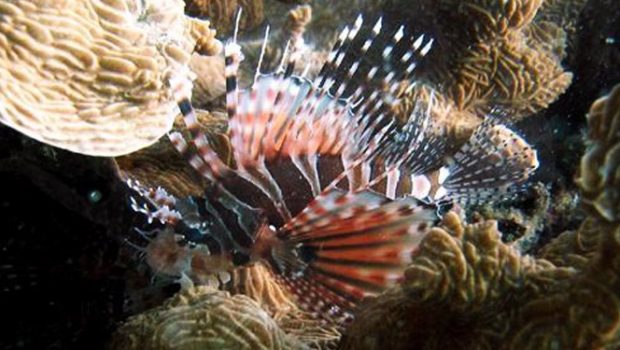 Noted for the crystal-clear waters, as far down as 30 of colourful marine life, offering underwater sportsmen some of the best diving sites in the world. The shallow reefs at the nearby islands of Tulai and Renggis are popular spots for scuba diving and snorkeling. Divers can also explore the underwater cave around Chebeh Islands are uninhabited and within an hour’s boat ride from the main highlands. Around the waters near Mukut Village, divers have a chance to view a coral encrusted wreck of a Japanese warship. At the Marine Park Centre located between Tekek and Air Batang, you can also savour the thrill of swimming among the fishes as they swim out to greet you. 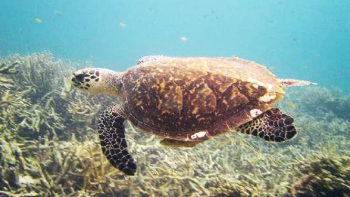 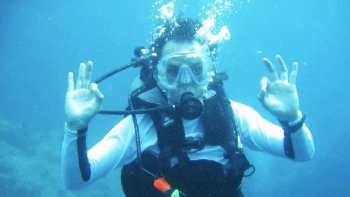 Tioman Island is a heaven for divers of all levels. The calm water and dive sites such as a little islands of Renggis and Soyak are ideal for beginners and underwater photography. Dive sites like Chebeh and Magicienne Rock are popular spot among the advanced divers. They occasionally sighting of huge Manta Ray, Whale Shark, Black Tip Reef Shark, Great Barracuda and Turtle. The seabed around Tioman holds many secrets and mysteries. It is the final resting place for numerous vessels, mainly scuttled wooden hulled fishing trawlers. Night dives can also be arranged to witness the display of nocturnal marine life. 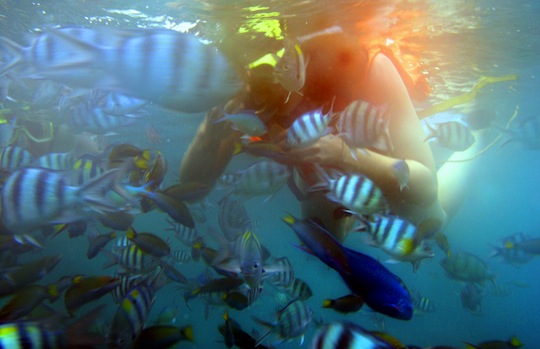 Snorkeling in Tioman is a paradise for you to discover the underwater world. Warm waters and high visibility make Tioman is a popular destination for snorkeling. Small marine life nearer to the beach is ideal and suitable for beginners. For those who wish to swim alongside fishes, marine park is a favorite spot and at the same time enjoy the beauty of underwater garden. 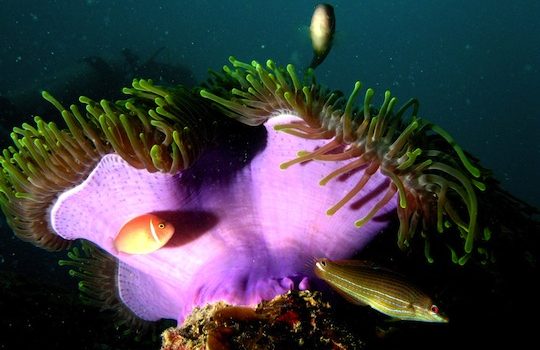 The cluster of Tioman Island was gazette as marine park to protect its precious marine life. The water of Tioman are home to splendid marine life and colorful dense corals. The Marine Park centre is located between Tekek and Air Batang village and manage by the Fishery Department. As a protected area, only certain activities are permitted such as snorkeling, scuba diving, swimming and underwater photography. Coral, shell picking and other damaging activities are strictly forbidden. Fishing is not allowed within 3 km. radius of the island. Great efforts has been made to protect the island, visitors are urged to help and support the local authority to preserve the nature.

Another popular activity in Tioman is the Island Hopping. There are several Islands around Tioman that can be visited such as Tulai, Chebeh, Sepoi, Labas, Sembilang, Sri Buat Tokong Bahara and Jahat. Located about 45 minutes off Salang Village is the Tulai Island, reputed to be the best, the water is crystal clear, white sandy beach, swaying coconut trees, colorful corals and fishes has made Tulai island a perfect place for swimming and picnicking. On your lucky day, you will be greeted by ‘Dolphins’ a friendly mammals that occasionally spotted around Tioman. 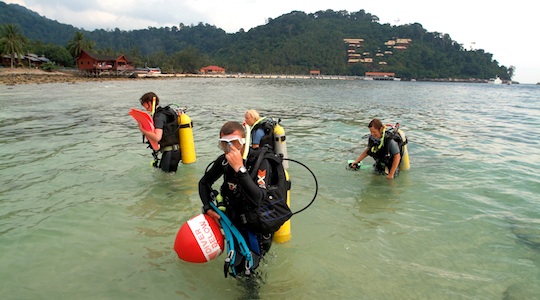 (PADI) Tioman also offer an opportunity for diving enthusiasts. Most dive operators and instructors cater to varied preferences from introductory dives, night dives to technical diving ‘PADI’ certification courses are also conduct by many dive operators on the island. This course can be conducted only within a week of your stay.

Last minute bookings: For bookings with less than 24 hours notice, we strongly recommend you call our charter team on Salma:+66 8 6965 9651.

When my wife and I got off the yacht at the end of the day we both turned to each other to talk about how amazing the service was. I’ve been on boats my whole life and I was impressed. First class from start to finish!

Everything was great and we will recommend you guys for our friends. We truly appreciate everything.

I would like to thank you all for such a wonderful experience on our chartered yacht. Everything was perfect.

The yacht itself is in perfect condition, it’s luxurious and also comfortable.

The staff has great service mind. With the help of your captain and staff, we had the fresh BBQ prawn on board from local fisherman who just happen to be around our yacht. My family was so impressed.

The food and beverages served on board are more than enough.The side trip to Pan Yee Island, and kayak around Koh Hong was also great!

Overall, our group are so impressed with the whole experience. Once again, thanks to the Boat Lagoon Yachting team and if we plan for yachting trip again in the future, your team will be our top choice.

It was fantastic experience. Everything is great.

Thank you a million times over krub.

It was very good we all had amazing time.
Will come again to you and will recommend friends too.

A wonderful experience on Princess 64.
Thank you again for always arranging such nice accommodations for me and my friends.

Thank you for a perfect 2-day adventure.
The service level was spectacular.
The boat beautiful and everyone was lovely.
A+

I just wanted to say a big thank you to you for all your help organizing the trip on Saturday and also to the crew who were absolutely fantastic!
Myself and all friends had a brilliant time and will be sure to recommend your team for future trips.

Thank you once again,
Guest